What do Brad Pitt, George Clooney, and Meryl Streep have in common? None of them are fences. I’ve done all the research, and you can not find a picket between the three of them. Joking aside, fences have always been a part of popular culture, hanging out in the background doing their job alongside the rest of the cast. Fences are the perfect supporting character: they’re resolute, know their purpose, consistent; they’re not in it for glory or stardom, they’re in it to keep family, friends and neighbors together! Here are three fences that are the perfect backdrops in pop culture.

Ah, Wilson! The epitome of every humble, wise, faceless neighbor you’ve ever had. Wait a second… faceless?!? Alright, you do get to see the top of his face at least, but the bottom half is masked by the backyard fence. And if we have learned anything from Home Improvement, Tim “the Toolman” Taylor more than likely consulted professional help to have the fence built. You know, because he’s so bad with tools.

The fence separating Wilson and Tim provides an air of mystery, and reminds us that it is not what our neighbors look like, but what they have to say that is important. Sure, the Wilson/fence set-up is a classic sitcom trope and a great goof that got a lot of mileage in the show, but it’s nicer to think that the fence was there to prove that it’s what’s inside that counts… and also that it’s a little infuriating we never get to see his face. Well, here is the moment you’ve all been waiting for. I present to you Earl Hindman, the actor who played Wilson himself. 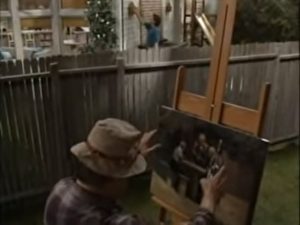 The Sandlot provides us with another fence used to create an air of mystery, this time of a more monstrous nature. The Sandlot is a coming-of-age tale about some kids who just want to play some baseball, but their baseballs keep ending up on the other side of a fence. A fence that houses the dog the boys dubbed “The Beast”. With no clear vantage point over the fence, the beast remains a mystery and their baseballs in dangerous territory, no matter how many wacky ways they try to retrieve them.

The boys have spun lore and myth around this dog, chiefly that once a child goes over that fence, there is no coming back. I’ll let you connect the dots on that one.

When Benny musters the courage to climb over the fence to retrieve a ball, a chase ensues with the beast, with its conclusion showing that the dog was just misunderstood. Because they never got to know the dog, the boisterous boys had this beast pegged wrong the whole time! He’s actually a super nice dog owned by Darth Vader himself, James Earl Jones. (Sidenote: his name is Mr. Mertle in the movie, but we all know he will always be Darth Vader.) So let that be a lesson to you, don’t judge a book by its cover, or neighbor by their fence, or Darth Vader by his other roles.

King of the Hill

And here we are, the quintessential Texas fence in pop culture if there ever was one: the backlot fence in King of the Hill. This fence is less of a philosophical construction and more of an old friend. A worn in pair of jeans or cowboy boots, a fresh case of Alamo beer with friends, that old Chevy truck you’ve kept running since you were a teen, Blue Bell ice cream without the listeria.  No doubt that Hank Hill built that fence to a standard even Texas Fence would be proud of. How many times have we stood in front of that fence with them dealing with Hank’s pride, Dale’s insanity, Bill’s anxiety, and Boomhauer’s words of infinite wisdom and grace? How many lessons has Bobby learned in and around that fence? How many ways can Peggy say “fence” in Spanish? At the end of the day they could always go hang out by the fence, and that’s what makes a house a home. 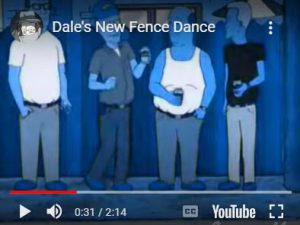 Contact Texas Fence to get the perfect supporting character in your family’s story, a new fence.

Want to learn more about the cultural role fences play in our lives?
Read our blog piece, The Timeless Beauty of White Picket Fences.

And if you’re looking for a fence like the one Tim Allen and Wilson would talk over, or even one to gather around like Hank Hill and his friends, learn everything you need to know on our Western Red Cedar Fence Buyers Guide.

We serve the Houston and Surrounding Areas

If you are looking for a Houston fence company that provides Residential Fencing, Commercial Fencing, Access Control and focuses on superior customer service, look no further than Texas Fence

If you are looking for a Houston fence company that provides residential or commercial fencing and focuses on superior customer service, look no further than Texas Fence